The economic calendar in the coming seven days will be a busier one with a slew of data releases and the Fed’s first monetary policy meeting of the year. The US employment report will be the data highlight of the week followed by the euro area’s preliminary GDP reading for the final quarter of 2017. PMI figures out of the UK and China and Australian CPI numbers will also be important.

The Australian dollar has rallied over 3.5% versus its US counterpart so far in 2018, though the gains have mainly been driven by a weaker greenback and strong risk appetite than any convincing signs that Australian inflation is on the up. Quarterly CPI data due on Wednesday could change this picture however as the annual headline rate is forecast to accelerate to 2% in the December quarter, from 1.8% previously. Also due on Wednesday are figures on private sector lending for December, while Thursday’s building approvals are also likely to grab some attention. The Aussie could re-test this week’s 4½-month high of $0.8118 should the incoming data top the forecasts. 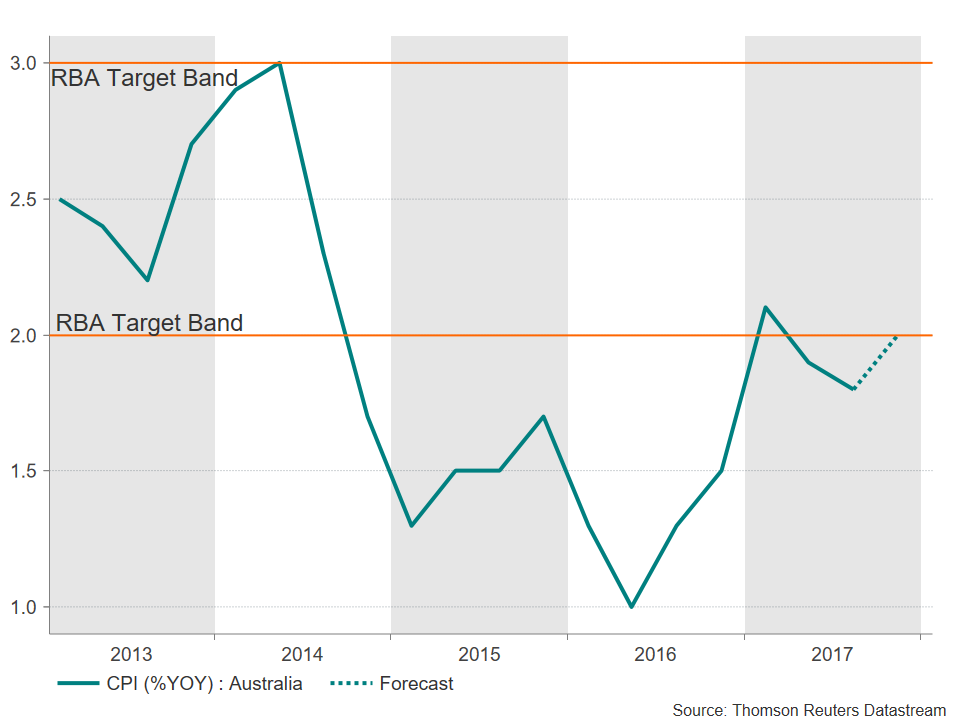 At its meeting earlier this week, the Bank of Japan’s governor, Haruhiko Kuroda, failed to convince markets that the bank is a long way off before it begins to scale back its massive stimulus program. The minutes of the December meeting released on Friday showed some board members voiced concern about the possible side effects from negative interest rates and purchases of exchange-traded funds. We could hear more such concerns from the BoJ’s Summary of Opinions of the January meeting on Wednesday, putting even more pressure on the dollar/yen pair.

Before that though, data on household spending, unemployment, and retail sales will be looked at on Tuesday. Household spending is forecast to dip 0.6% month-on-month in December, while the annual growth in retail sales is expected to moderate to 1.8% from 2.2% in November. The unemployment rate likely held steady at 2.7% during the same period. Also to watch are industrial production figures on Wednesday. 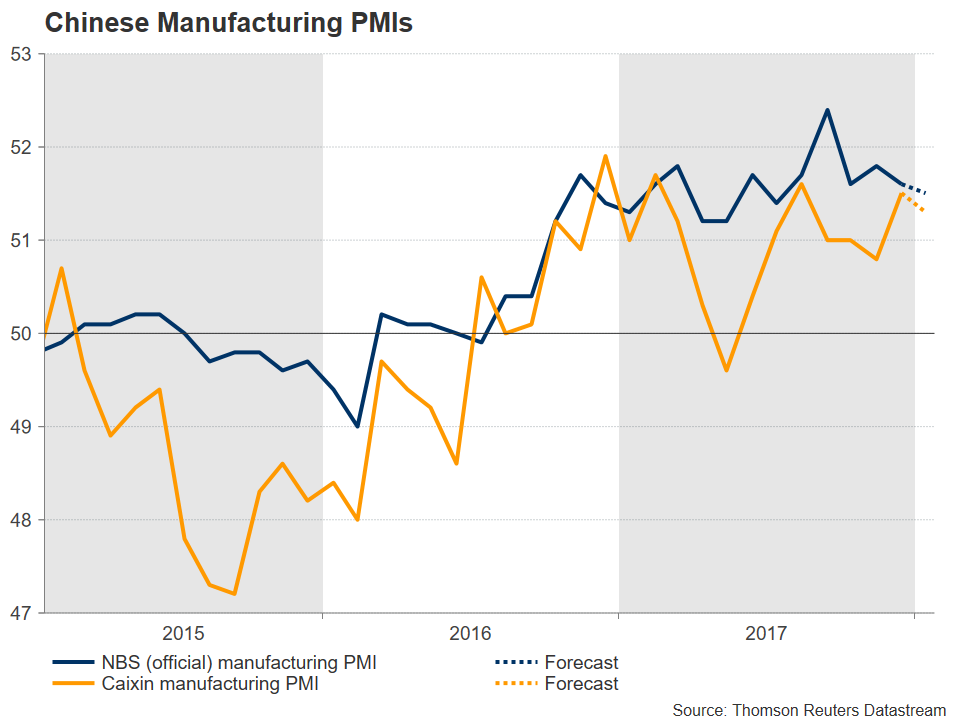 The UK will also see the release of the PMI business gauges. British manufacturing activity is expected to improve in January, with the index rising from 56.3 to 56.5 when released on Thursday. The construction PMI will follow on Friday and is forecast to worsen slightly during the same period.

Sterling could get a further lift should the manufacturing data surprise to the upside, as it would underline the brightening economic picture in the UK. The pound could also be sensitive to Governor Mark Carney’s comments on the economy when he testifies before the House of Lords Economic Affairs Committee in Parliament on Tuesday. The Bank of England Governor, who was in Davos this week, said greater clarity on Brexit could help the UK economy “recouple” with the rest of the world. Optimism about a positive Brexit outcome has made sterling the best-performing currency against the US dollar so far this year, breaking above the $1.43 for the first time since the June 2016 referendum.

Eurozone GDP to point to strong end to 2017

The Eurozone will follow China, the UK, and the US in reporting its flash estimate of fourth-quarter GDP on Tuesday. From the major countries who have already published their figures, China and the UK posted better-than-expected numbers but US GDP disappointed slightly. For the euro area GDP, the risk is to the upside. Quarterly growth is expected at 0.6% for the three months to December, below the prior 0.7% rate, but given the upbeat business surveys, a surprise 0.7% print is possible. 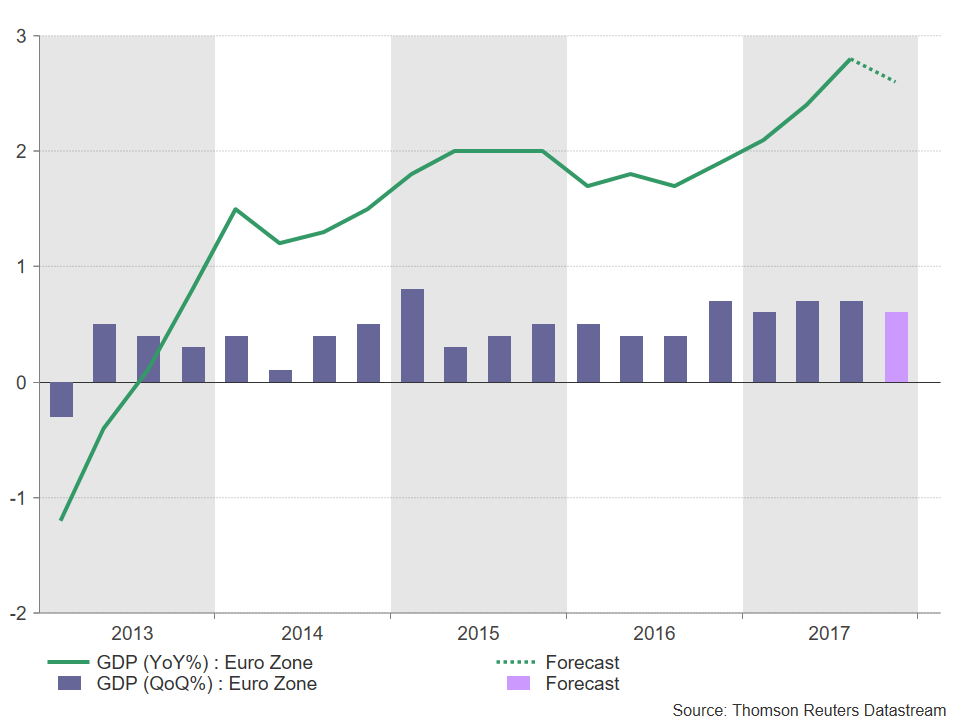 Also on Tuesday is the European Commission’s economic sentiment index, and on Wednesday, flash CPI estimates will be in focus. The preliminary reading is expected to show Eurozone inflation easing from 1.4% to 1.3% in January, potentially giving the ECB’s doves who are worried about the rapidly rising euro, a stronger argument for not rushing with a QE exit plan.

US data will dominate in the coming week, starting with Monday when the personal consumption expenditures (PCE) report is published. Personal income is forecast to rise by 0.3% month-on-month in December, while personal consumption is expected to slow from 0.6% to 0.4%. The report will also contain the core PCE price index, which is the Fed’s preferred measure of inflation. The index is forecast to remain at 1.5% year-on-year in December, pointing to an absence of inflationary pressures even as the labour market tightens further.

The January jobs report out on Friday should shed more light on the state of the US labour market. Nonfarm payrolls likely accelerated from 148k to 178k in January. The jobless rate is expected to stay unchanged at 4.1% but growth in average hourly earnings could quicken to 2.7% in January from 2.5%, with the month-on-month rate is forecast to hold at 0.3%. Among Friday’s flurry of data, the other notable release will be the ISM manufacturing PMI, which is expected to fall slightly to 59.0, as well as December’s factory orders. 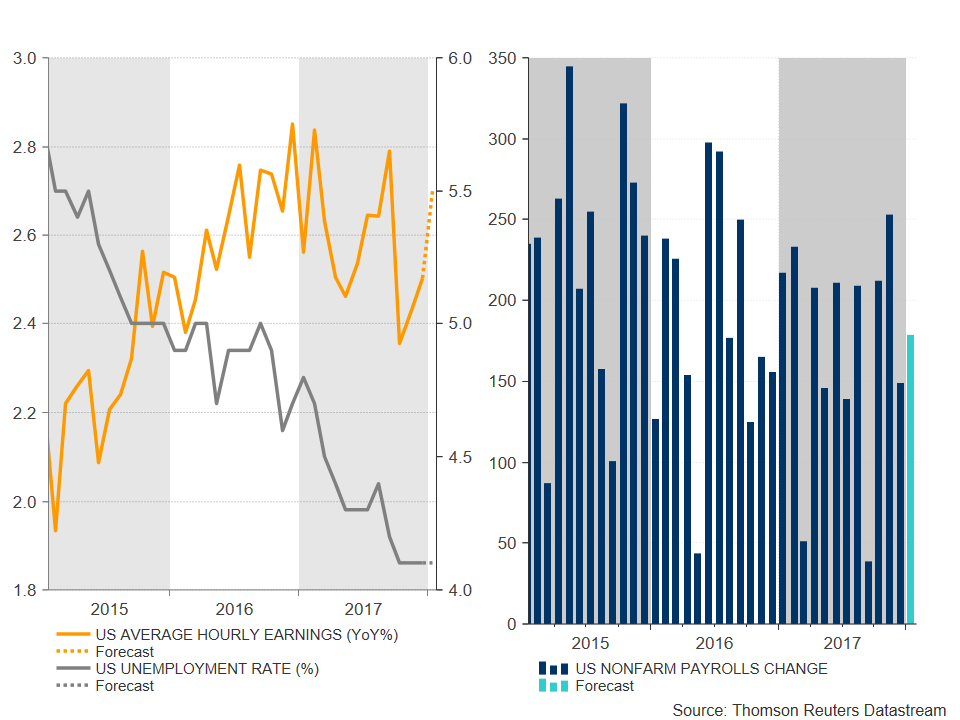 Going back to the mid-week schedule, housing data (S&P/Case-Shiller 20-City Home Price Index on Tuesday and pending home sales on Wednesday) will be watched along with the Conference Board’s consumer confidence index (Tuesday) ahead of the Fed’s monetary policy decision on Wednesday. The January FOMC meeting is looking like a non-event as it will be Janet Yellen’s last meeting as Chair before Jerome Powell takes over, and there is no press conference after the announcement. However, the accompanying statement could contain revised views on the economy and inflation, and while a March rate hike is widely priced in by the markets, unexpectedly stronger language could give the struggling dollar a bit of a boost.

Another key risk event for investors on Wednesday will be President Trump’s first ‘State of the Union’ address on Tuesday. The US President will probably use his speech to boast about the economy while promoting his agenda to increase spending on infrastructure and reform immigration laws. The main concern for the markets though will be whether or not Trump will mention trade as any fresh rhetoric on protectionist policies could further hurt the dollar, as well as dampen risk sentiment.