NFP Friday today and the US dollar braces for high volatility across the board. The figures that are forecasted, are for non-farm payrolls to drop to 189K after the previous read of 225K, for the unemployment rate to remain unchanged at 4.1% and average earnings on a monthly basis to tick up to 0.3%. Usually, the star of the day is the non-farm payroll figure however it should be noted at this point that in the previous release, average earnings played a key role in the reaction of the USD, suggesting that all three figures have their own weight in the market’s reaction. Having said that and given that the ADP report yesterday delivered far higher numbers than forecasted it could be the case that the market may be expecting the non-farm payrolls figure to increase as well. Some analysts forecasted a possible figure of 210K. So expectations of the market may be running high and should the actual figures not meet the expectations, there could be an adverse effect on the USD despite a possible increase of the non-farm payrolls figure per se. On the US political stage, president Trumps former assistant Steve Bannon charged the president’s son of treasonous behavior by meeting with a Russian lawyer in Trump Tower during the 2016 election campaign. Also, Bannon charged the Trumps of money laundering and reveals a lot of details about Donald Trump’s election campaign in 2016. The importance of the book which is about to be issued lays primarily in the fact that it reignites the issue and practically cancels any White House effort to subdue it.

The USD/JPY rose yesterday and during today’s Asian morning it broke the 112.90 (S1) resistance level (now turned to support). The pair is expected to be influenced by the US fundamental news today especially the employment report which is due to be released today. We expect the pair to trade in a bullish mood in the short run, however, we are hesitant to call for a rally yet. Should the pair continue to be under buying pressure it could break the 113.15 (R1) resistance level and head for the 113.35 (R2) resistance zone. Depending on the news the 113.35 (R2) resistance level could also be breached and should that be the case, the pair could test the 113.77 (R3) area. Should the pair on the other hand come under selling interest it could drop below the 112.90 (S1) support zone and aim for the 112.30 (S2) support barrier.

Negotiations to start in Korean peninsula

Negotiations are about to start in the Korean peninsula in an effort to smoothen out relationships between South and North Korea. Yesterday the North Korean Leader declared his willingness to discuss a possible activation of a border hotline between the two countries, a proposal that followed New Year’s statement about a possible attendance of February’s Winter Olympics by a North Korean delegation. The whole issue and negotiation’s possible progress could be overshadowed though by a US negative stand. Some analysts suggest though that once negotiations start on the 9th of January, any disorder in US-South Korean relationship should smoothen out. However given president Trump’s unpredictability and the fact that the US foreign policy has stuck to the N. Korea-power-of-evil story for so long, it could prove hard to for the US to welcome the negotiations.

As for today’s other economic data, during the European morning, we get the French and Eurozone’s preliminary CPI rates for December and later on, the much awaited US employment report for December is to be released.

The employment report is expected to move the cable, which continued yesterday, to trade above the 1.3460 (S1) support line and below the 1.3620 (R1) resistance level, but clearly above the upward trend-line which has its roots on December 26th. We see the case for the pair to trade in a sideways manner in the short term with risks tilted to the downside. Having said that it should be noted that the pair’s short-term direction could be heavily influenced by US fundamental news and especially today’s US employment report. Should the bulls remain in charge we could see the pair breaking the 1.3620 (R1) resistance level and aim for the 1.3684 (R2) resistance barrier. On the other hand, should the bears take the reins it could be the case that the pair may drop below the 1.3460 (S1) support level and aim for the 1.3330 (S2) support zone. 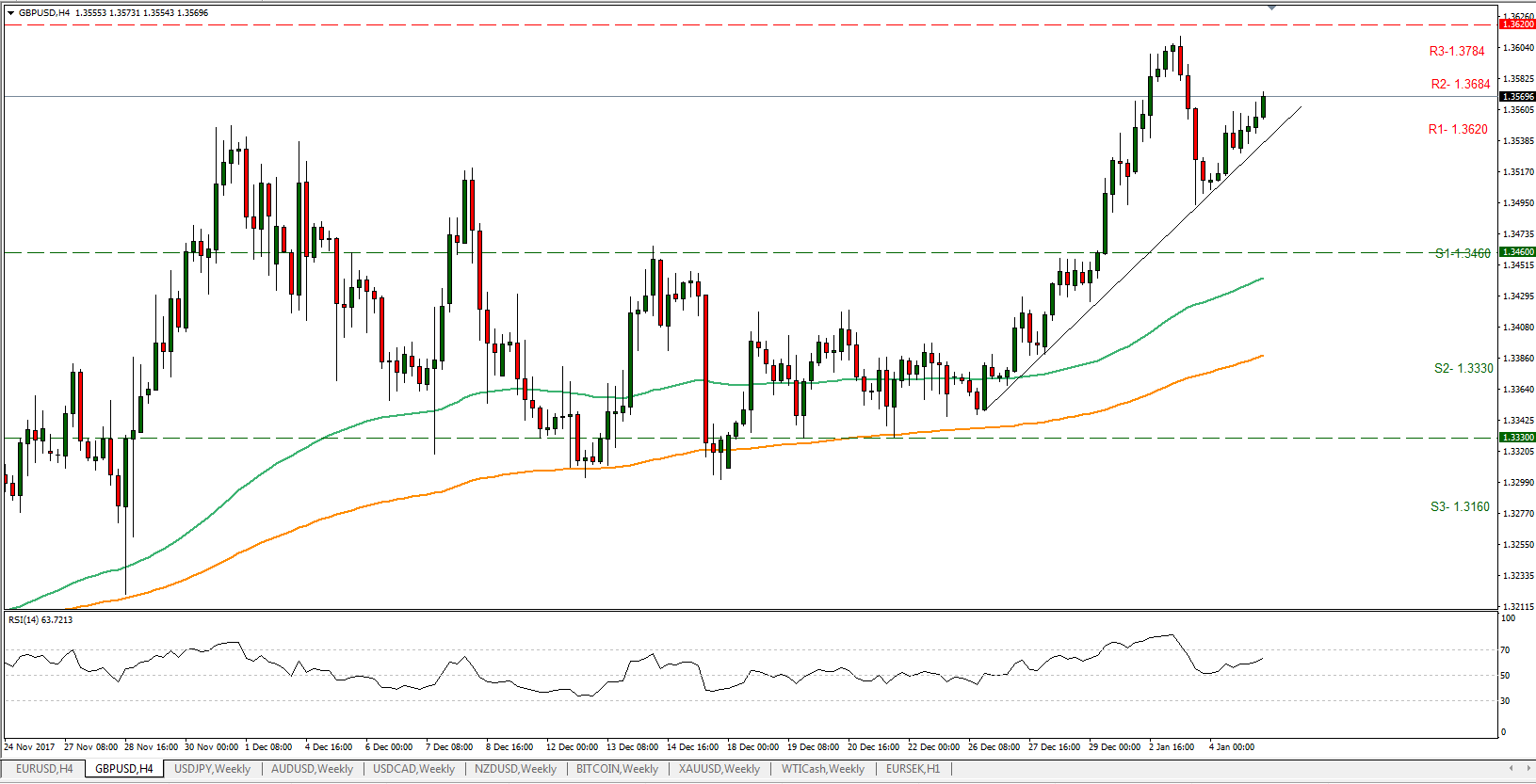 Last but not least, we get Canada’s employment data and Ivey PMI, both for December.