Eurozone inflation: Will it determine the euro’s short-term bias?

Eurozone’s preliminary inflation figures for December are due out on Friday at 10:00 GMT and forecasts project both the headline and the core CPI rates to tick down. With inflation likely to continue undershooting the ECB’s target over the coming years, will the Bank maintain its current degree of stimulus beyond September?

Inflation in the euro area has been subdued in recent years – and it’s expected to remain so for a while longer. According to the European Central Bank’s (ECB) latest projections, core inflation (excluding food and energy) is not anticipated to meet its target of “below, but close to 2%” until 2020. This is probably the main driver behind the ECB’s willingness to continue buying massive amounts of assets under its QE program; if it stops too early, inflation may take even longer to reach the target. 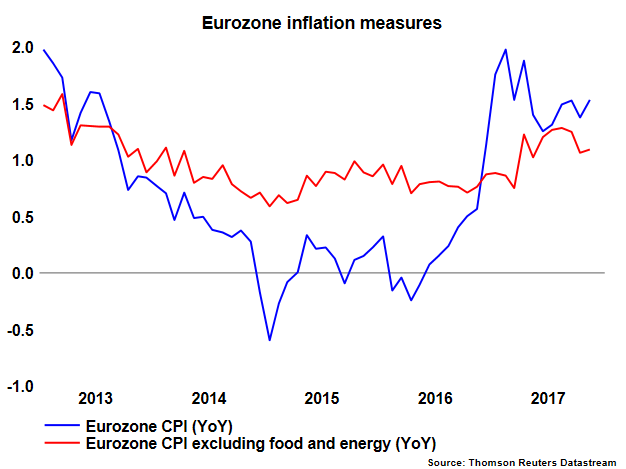 Does that mean the ECB is locked in? Under its current forward guidance, the Bank has pledged to continue QE until

“September 2018, or beyond, if necessary, and in any case until the Governing Council sees a sustained adjustment in the path of inflation”.

If one relies solely on this guidance in the context of low inflation, then a strong argument can be made that the Bank could extend QE beyond September.

Alas, guidance can change. Following the October gathering – where the ECB announced its QE extension – several key policymakers including Jens Weidmann hinted at the possibility of decoupling the Bank’s forward guidance on QE from requiring a sustained pickup in inflation. Such a change would pave the way for the Bank to reduce (or end) its purchases even while inflation remains below-target. This prospect has appeared even more likely lately, after ECB officials Benoit Coeure and Ewald Nowotny suggested the Bank could end its QE program in 2018 provided growth remains solid and inflation doesn’t disappoint.

This brings us to this week’s release of inflation data. The consensus is for both the headline and the core CPI rates to decline marginally, to 1.4% and 1.0% respectively on a yearly basis. However, such prints will hardly be a shocker for the ECB. The Bank’s own forecasts already project the headline CPI to end the year at 1.5% and the core at 1.0%. Thus, if the forecasts are simply met, these data are likely to have little impact on ECB decisions and by extent, on the euro.

That said, a potential upside surprise in these rates – and particularly in the core – could amplify further the case for the Bank to end its QE program this year. Something like that could encourage euro/dollar bulls to take the reins and perhaps aim for another test of the 1.2080 zone, where a clear break could open the way for the 1.2130 area, marked by the lows of August 2012. On the other hand, a larger-than-expected decline in the CPI rates could heighten speculation that the Bank may extend QE again. In this scenario, the bears could drive the pair lower, aiming initially for the psychological territory of 1.2000. A decisive break below that level could set the stage for more bearish extensions, towards 1.1960. Lastly, it is paramount to note that much of the pair’s forthcoming direction will also be decided by the US employment data for December, due out a few hours after Eurozone’s CPIs.