Numerous central banks are scheduled to meet to set monetary policy next week. This includes the Federal Reserve, probably the world’s most closely watched central bank. It is also the one expected to make a move in the direction of policy normalisation. Beyond this, major economies will see the release of important data, the UK is one of them with releases on inflation, wage growth, and retail sales being eagerly awaited. In politics, the US tax story and the EU’s official decision on whether Brexit talks can move to the next stage are expected to gather most attention.

In terms of potential market movers for the antipodean currencies: Sunday’s (Monday for Asian traders) November electronic card retail sales out of New Zealand would be of interest. Australia will see the release of November employment (and unemployment) data on Thursday. There is much talk of elevated house prices in Australia and thus the third quarter’s home price index due earlier in the week (Tuesday) will be attracting attention as well. National Australia Bank’s surveys on November business conditions & confidence will also be released on the same day as house price data.

Thursday’s figures on urban investment, industrial output, and retail sales – all for November – are expected to attract most attention out of China. The annual pace of growth for the former two readings is expected to slightly ease, though still reflect relatively robust expansion. Retail sales are expected to expand by 10.2% on an annual basis. This compares to a 10.0% y/y growth in October. The Chinese government seems to increasingly worry about rising debt levels as of late and loan data out of the world’s second-largest economy next week will also be eyed (these data reports lack a specific release date). 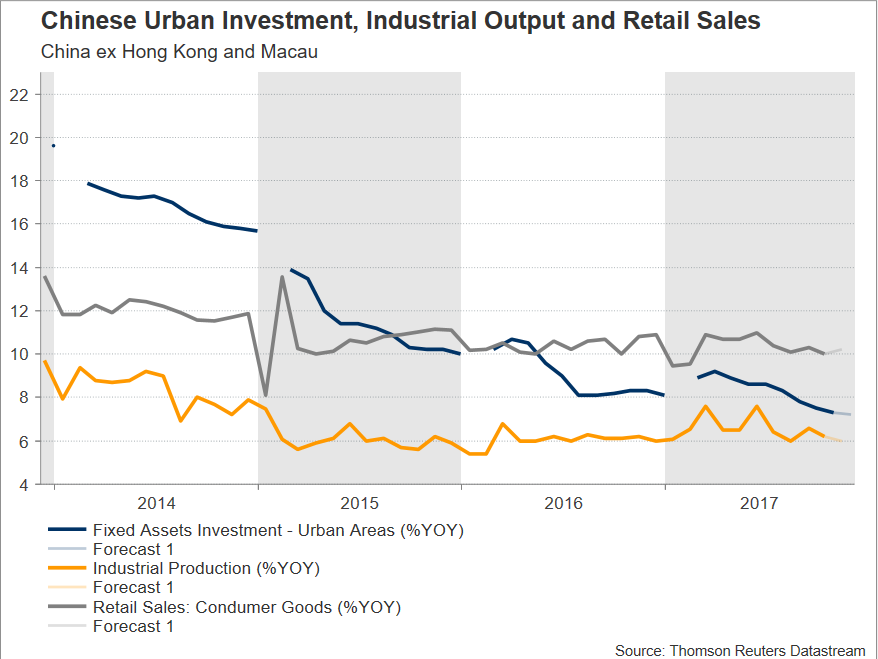 In Japan, figures on November corporate goods prices are due on Monday (Greenwich Mean Time). October’s machinery orders will follow on Tuesday and December’s Nikkei flash manufacturing PMI will be released on Thursday. Later on Thursday, the world’s third-largest economy will see the release of the Bank of Japan’s fourth quarter Tankan surveys on, among others, big and small manufacturers and their respective capital expenditures. Big manufacturers’ confidence in business conditions in Japan stood at a decade high in the third quarter. It would be interesting to see if momentum is maintained in the final quarter of the year.

On Tuesday, Germany will see the release of the ZEW institute’s December surveys assessing economic sentiment as well as current economic conditions in the country. The following day, final November inflation figures for eurozone’s (and Europe’s) largest economy are due.

Out of the eurozone, October industrial production figures will be released on Tuesday. The greatest volatility in euro pairs though is likely to come from Thursday’s release of December flash PMI estimates for the manufacturing and services sectors as well as the composite measure that blends the two sectors. Expectations are for the readings to ease a bit from November’s releases, though still remain robust and well above the 50-mark that separates sectoral growth from contraction (the respective individual country readings for Germany and others will be released earlier on the same day).

The European Central Bank’s decision on interest rates due on Thursday is another event having the capacity to generate movements in the euro. ECB chief Mario Draghi will be holding a press conference shortly after the policy announcement. Rates are expected to remain on hold but it would be interesting to see whether Draghi signals hawkish voices within the ECB are getting strengthened. Minutes from the bank’s latest meeting showed diverging views among policymakers on whether the asset purchase program that will be in effect starting next year should have been open-ended or not. According to the minutes, some policymakers demanded a clear end date.

In the UK, prior to the Bank of England meeting on Thursday – the central bank is widely expected to keep rates on hold – Tuesday’s inflation figures for the month of November will be closely watched. The inflation rate is expected to remain at the more than 5-year high of 3.0% on an annual basis. This compares to the BoE’s inflation target of 2.0%. Data on November producer prices will be made public at the same time as inflation numbers. Wednesday will see the release of November’s claimant count pertaining to unemployed individuals, as well as October’s unemployment rate and average earnings. The unemployment rate is expected to remain steady at the 42-year low of 4.3% for the fourth consecutive month, while it would be interesting to see to what extent the divergence between inflation and wage growth, which eats into households’ purchasing power, continues. The final important release before the BoE meeting will be Thursday’s retail sales for November. 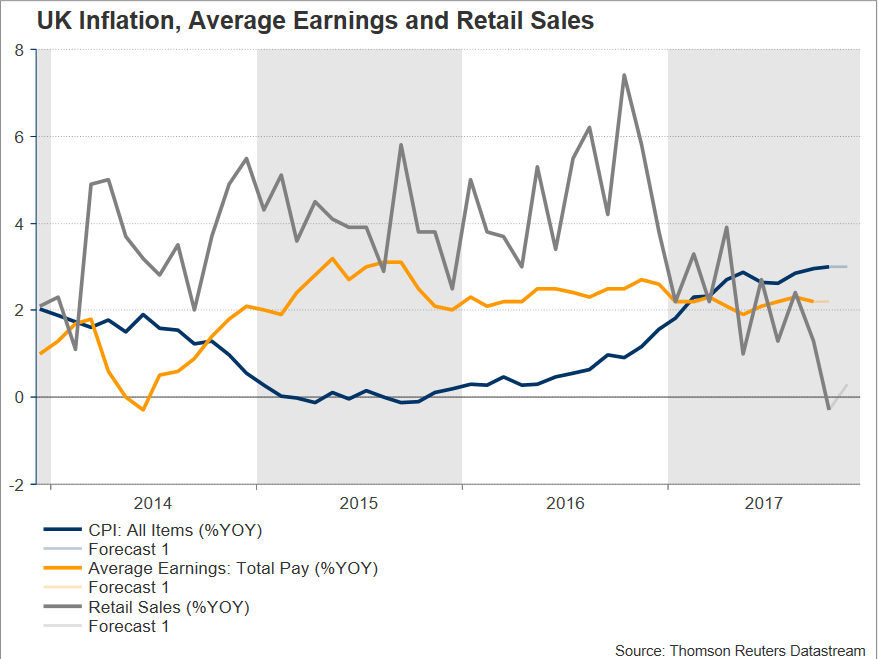 On the political front, the EU heads of state summit is set to take place on December 14-15. Upon completion of the summit, the 27 remaining – following Britain’s departure – EU member states will be making a formal decision on whether Brexit negotiations are allowed to enter the second stage, that of determining the future relationship between the two parties. Sterling, which has proved highly sensitive to Brexit developments, will be in focus.

The Federal Reserve’s December 12-13 meeting is widely expected to result in a quarter percentage point increase in the Fed Funds rate. The press conference that will follow upon the completion of the two-day meeting will be Janet Yellen’s last as Fed chair before she is succeeded by Jerome Powell in February. Thus, one might think that markets won’t be paying as much attention to her comments. Given that Powell was dubbed by many as “Mr. Continuity” though, such a perspective would most likely be unwise. The FOMC’s dot plot that encapsulates policymakers’ expectations for rates further ahead is also spurring the interest of forex market participants. One should not forget though the upcoming changes on the Fed Board, with several members, soon departing; the new composition would have the capacity to reshape Fed hike expectations depending on where the new members would stand on the dovish to hawkish spectrum. So far markets have priced in close to two rate hikes for 2018 (the second one is more than fifty percent priced in). 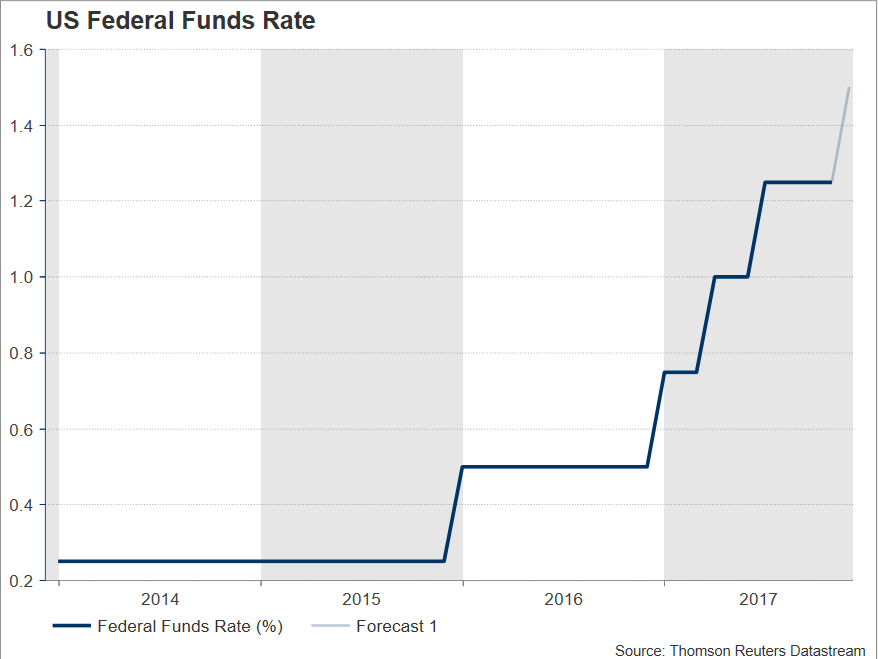 Of most interests in terms of US data are likely to be Wednesday’s inflation figures, Thursday’s retail sales and Friday’s release on industrial production, all for the month of November. On a monthly basis, inflation is expected to grow by 0.4%; October’s reading was at 0.1%. Month-on-month, retail sales are projected to have grown by 0.3%, above October’s 0.2%. November’s industrial production is forecast to have expanded by 0.4%, at a slower pace relative to October’s 0.9%. Beyond these, another key release out of the world’s largest economy will be October JOLTS job openings (Monday).

On the US political front, lawmakers’ efforts on tax reform will be at the center of attention. Senate Republicans agreed this week to engage in discussions with the House of Representatives in an attempt to reconcile the two versions of the tax bill they voted in favor of, with a December 22 self-imposed deadline being in place.

Remaining within North America, it will be a quiet week for Canada, with Friday’s manufacturing sales potentially causing some volatility in dollar/loonie as well as in other loonie pairs.

Finally, it should also be mentioned that the Swiss National Bank and Norges Bank will also be completing their meetings on monetary policy next week (December 14).