Gold is neutral after stabilising from a recent drop, but the risk is tilted to the downside in the short term. On the 4-hour chart, oscillators are neutral to bearish.

The recent consolidation phase is currently trapped below the 23.6% Fibonacci and is keeping the bearish trend in progress since the decline from 1357.47. A break below 1260.59 would bring a resumption of the downtrend from the multi-month peak.

However, a prolonged consolidation would lead to further loss of momentum and the market’s focus could shift back to the upside. A move above the 50% Fibonacci would indicate the bearish phase has ended. From here, the odds would increase for a test of 1357.47 and gold would see a reversal in the short-term bearish trend.

USD/CHF looking bullish in the short- and medium-term; pair trades around parity 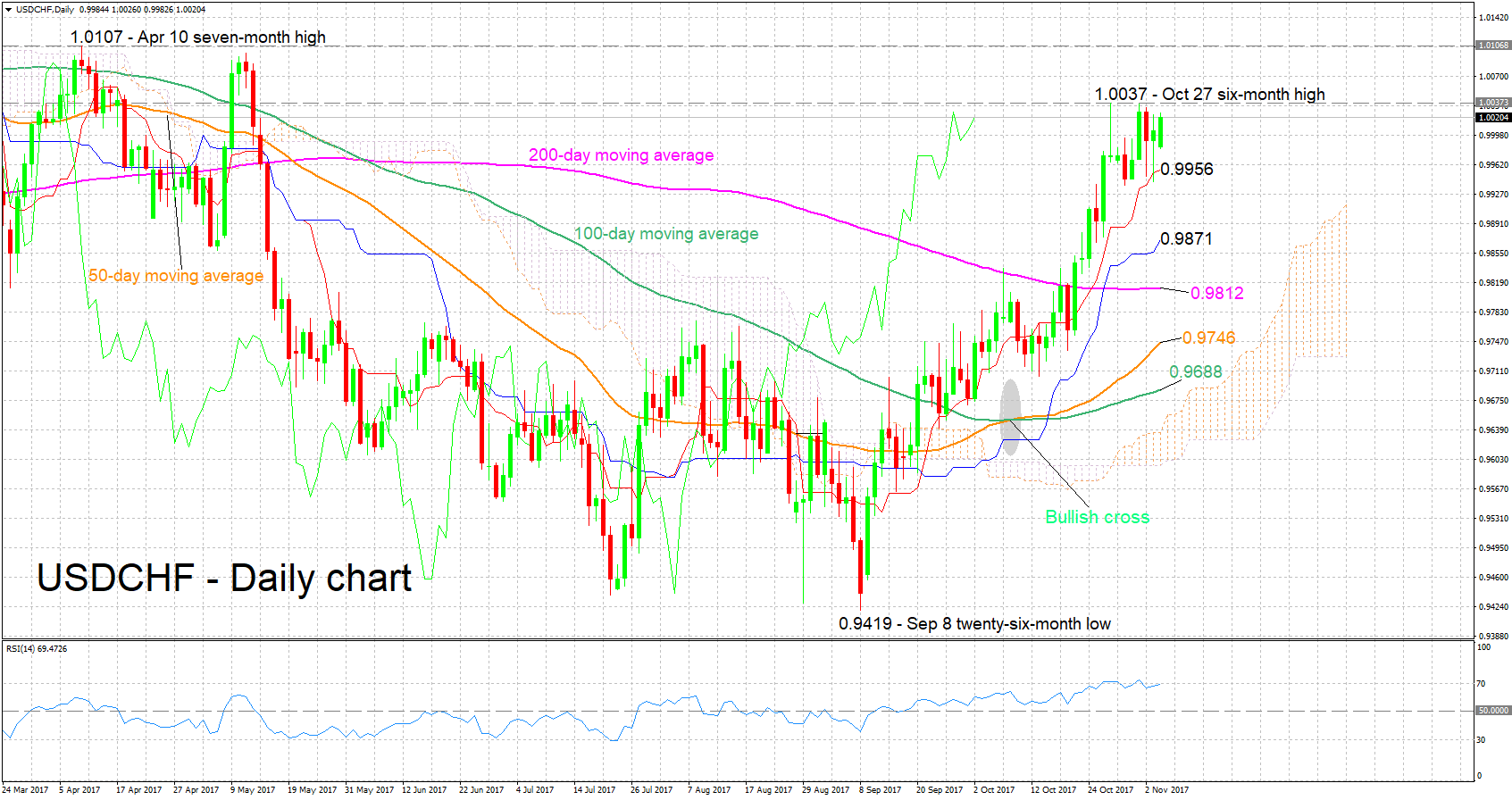 USD/CHF has been on an upward path after reaching a 26-month low of 0.9419 on September 8. The pair has reached and has been trading around the parity level (1.00) in recent days.

The Tenkan-Sen line being above the Kijun-Sen line is a positive alignment pointing to bullish momentum in the short-term. The RSI adds to the view for positive momentum as it has been rising over the last number of days. Notice though that the indicator is currently at 69, close to the 70-overbought level.

If USDCHF continues rising, the area around 1.0037 – the six-month high from October 27 – could act as resistance. Notice that the price is at the moment not far below the aforementioned high. Further above, the range around the seven-month high of 1.0107 from April 10 could act as an additional barrier to the upside. The area around this potential key level encapsulates another peak from the recent past, namely the May 11 six-and-a-half-month high of 1.0099.

Should the pair decline, support could come around the current level of the Tenkan-sen at 0.9956 and further below (and given a sharper move down) from the range around the Kijun-sen at 0.9871.

The medium-term picture based on movement over the last five months is looking bullish. The overall trend throughout this period is a positive one. Additionally, both the 50- and 100-day moving averages (MAs) maintain a positive slope while there was a bullish (golden) cross recorded in early October when the 50-day MA moved above the 100-day one.

Overall, the pair is looking bullish in both the short- and medium-term.

EUR/USD maintains its bearish outlook after the breakdown of the key level at 1.1660. The chart pattern on the daily time frame indicates a head and shoulders pattern with a break below the neckline giving a bearish signal.

A rise above the 50-day moving average and above the right-shoulder high of 1.1874 would confirm the short-term bearish phase has ended. This would bring a re-test of the 1.2091 peak before the resumption of the uptrend from the April lows.

Technical indicators are bearish but RSI is suggesting the near-term bias is neutral. In the bigger picture, sustained trading below the 50-day moving average will keep the bearish outlook in place.