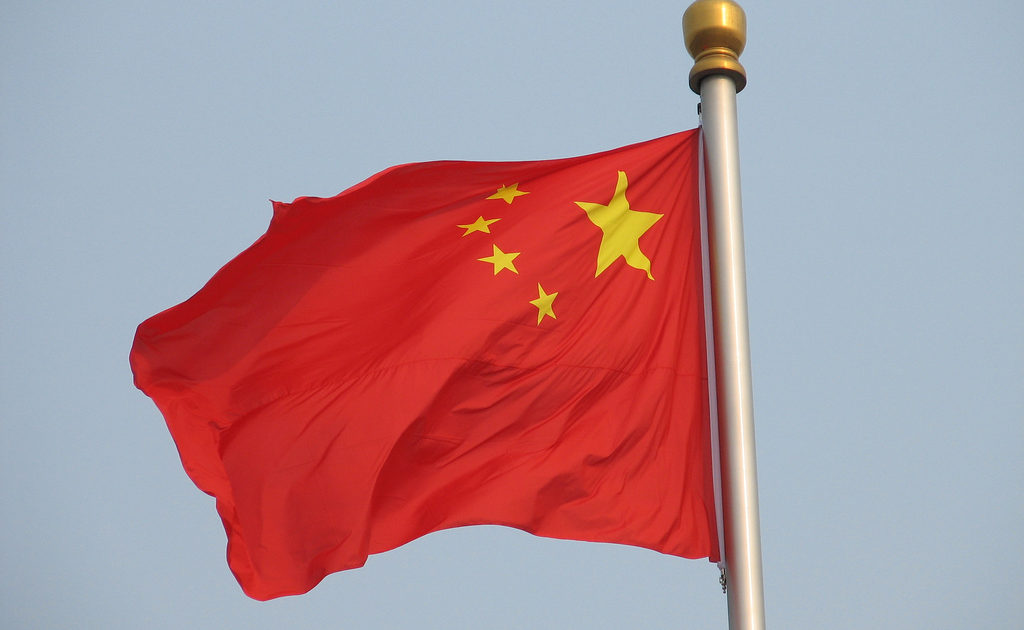 Who stands to lose the most?

International organisations including the International Monetary Fund and the World Bank have been warning of dangerous debt levels in China. A debt crisis in the world’s second-largest economy might seem like a frightening prospect for the rest of the world, however a closer look reveals that under the current state of affairs, one such crisis would mostly be of serious detriment to nations whose exports are heavily directed towards China, one such nation being major commodity exporter Australia.

Not too long ago, credit cards were unheard of in China. Nowadays, a credit explosion is being evidenced in the country with consumer debt rising as a proportion of Gross Domestic Product and standing at a multiple – three times – of what it was around ten years ago. If the trend continues, then it is expected that in a few years’ time indebted Chinese households would rival those in the US before the 2007-09 global financial crisis.

The IMF is sounding the alarm, anticipating China’s non-financial sector debt to stand close to 300% of GDP by 2022. Last year, the fund’s projections stood at 242%. Non-financial sector debt includes household, corporate and government debt. Worryingly in its report, the IMF makes reference to “increasing risks of a disruptive adjustment”. It should be mentioned though, that not everything is negative in the IMF’s annual assessment of the Chinese economy. In particular, the organization points out that China “has potential to sustain strong growth over the medium term”. But to safely do so “requires speeding up reforms to make growth less reliant on debt and investment”. In addition, the fund acknowledges that the government has begun taking “important initial steps to facilitate private sector deleveraging”, however it urges for efforts to “intensify”. 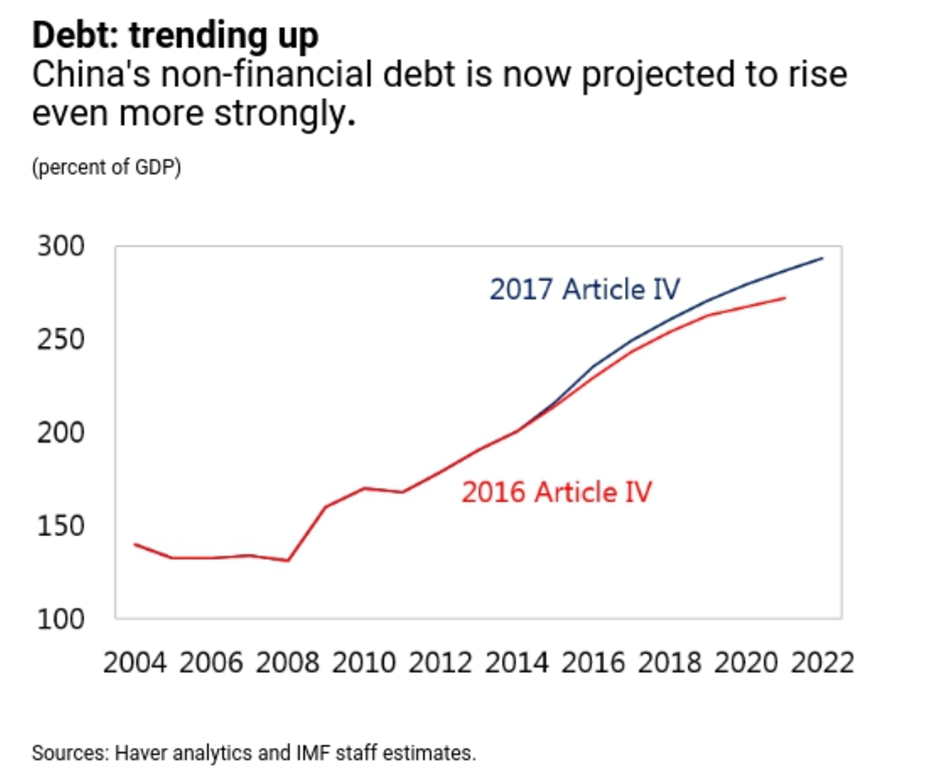 Credit expansion is not necessarily a bane for an economy. Given that there are productive investment opportunities craving for funding, then debt can allow them to come to fruition, leading to economic growth. However, perhaps alarmingly so, the efficiency of credit has been declining in recent years, suggesting that productive investments are getting scarcer and that probably money is being put to bad use, fueling overcapacity in industries and hampering productivity. According to the IMF, “in 2008, new credit of about Rmb6.50 trillion was needed to raise nominal GDP by Rmb5tn.” This compares to Rmb20tn in new credit in 2016 to achieve the same level of growth. More simply, in 2008, 1.3 renminbi in credit was put to use for each renminbi added to nominal GDP. In 2016, to achieve the same level of growth, 4 renminbi were needed in debt.

Beyond the non-financial sector, total debt in the economy is currently estimated to stand around 250% of GDP with GDP being at around $11 trillion. China’s foreign exchange reserves stood at $3.1tr at the end of October, climbing for nine straight months. These serve as valuable ammunition for the government in the event of a banking crisis that forces it to intervene and rescue the system via a recapitalisation. However, an additional twist to China’s debt problem is the so-called shadow banking system.

The full extent of the debt problem is not really clear due to the shadow banking system’s involvement and the inherent lack of data associated with it. Further complicating things, is the fact that shadow banking activities seem to be growing sharply, as well as the increasing interconnection between shadow banks and China’s formal banking system. In its October report on the East Asian and Pacific economies, the World Bank stressed that shadow banking might inflict a Chinese debt crisis. In its report, the World Bank says that the most representative shadow banking activities involving loans and bankers’ acceptances have “soared from under 7% of GDP in 2005 to over 31% of GDP in 2016.” The organisation also made reference to the connection between shadow banks and official banks. A crisis stemming from such entities can thus turn into one of systemic nature as was the case with special purpose vehicles (SPVs) in the US during the subprime mortgage crisis.

The lack of a clear picture on the debt issue makes it difficult to assess the problem and thus the government’s capacity to respond. A crisis finding the government unable to resolve the problems in a fashion that allows the economy to grow at around the current pace and consequently significantly hampers growth moving forward would surely negatively affect the global economy, wouldn’t it? Perhaps surprisingly, this might not be the case. This is where analogies to Japan might help us evaluate the impact of a Chinese crisis on the rest of the world.

One important point to make is that most Chinese debt is internally held, rendering the problem more of a domestic issue. The same was true for Japan when it faced a real estate crash and a banking crisis in the early 1990s. Back then, Japan was dubbed the engine of global growth, just as now and for the past decade China seems to possess that role. And yet when growth rates in the then engine of global growth fell close to zero percent, the rest of the world was not considerably affected by the Japanese slowdown. Moreover, the Japanese economy rebalanced, with its citizens still being considered among the wealthiest in the world. It is not unlikely that China is headed along a similar path.

Despite Chinese problems looking domestic in nature, something which would limit global repercussions should a Chinese banking crisis emerge, still it is expected that there will be some big losers should economic activity significantly decelerate in the world’s second-largest economy. One of those losers would be Australia, having China as its top trading partner with the bulk of its exports headed to the country. Emerging markets such as Brazil and other major industrial metals producers are also projected to feel the burn from such a slowdown. Such countries are already considered to be impacted by China’s efforts to rebalance its growth model away from manufacturing and investment. Market participants, having in mind currency markets as well, will position themselves accordingly should a credit crisis occur in China, “punishing” the Australian dollar and the Brazilian real, with a currency adjustment of course anticipated in the yuan as well. 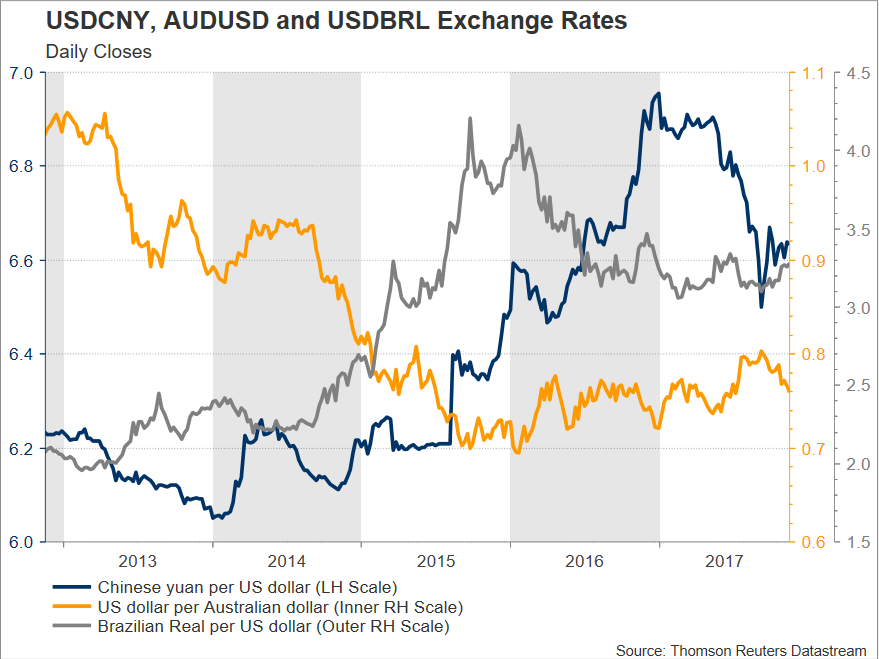 It should also be pointed out that despite the problem seeming relatively contained, for the time being, financial institutions in China are increasingly having global aspirations. Should this trend continue, then a Chinese debt crisis might turn into an international crisis with the global financial system potentially facing another “Lehman moment”.

One might argue that warnings about the health of the Chinese economy have been a recurring theme over the last number of years with those sharing their concerns being proved wrong time after time. Will the central government, through its actions, yet again prove them wrong? It remains to be seen. There seem to be some hints that the government is indeed acting to address the issues raised by high debt levels.

Important data on October fixed asset investment, industrial production, and retail sales released recently all came in solid, though below expectations and reflecting a slowdown relative to the preceding month. The 6.8% annual GDP growth during the third quarter also reflected a minor slowdown relative to the 6.9% in the first and second quarters. Still, the third quarter’s rate of growth was robust, exceeding the government’s growth target for 2017 of “around 6.5%”. The recent mild deceleration is seen as evidence that the Communist Party’s government is attempting to shift focus to the quality of growth rather than merely the quantity, engaging in deleveraging efforts to limit the risks posed by excessive debt. The government’s environmental considerations are also seen as shifting growth patterns towards qualitative expansion over quantitative. Should this trend continue, then a gradual reduction in activity is to be expected, but rather a healthy and perhaps necessary one that will minimise the probability of a big crash further ahead.