US employment report, Europe’s inflation, other key data in focus

[lockercat]
On Monday and Tuesday, there are no major events or indicators on the economic calendar. 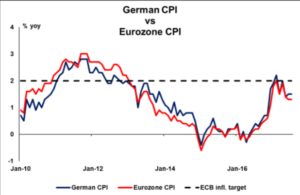 will be in focus and the consensus is for the inflation rate to have risen from the previous month. We share that view, considering that the nation’s preliminary composite PMI for August showed that prices charged rose at the fastest pace in five months. Meanwhile, the monthly print of August 2016 that will be dropping out of the yearly calculation was -0.1% mom, implying that anything higher than that now could drag the yearly CPI rate higher. A pickup in German inflation could raise speculation that Eurozone’s inflation, due out the following day, may also accelerate. However, we would like to stress that Germany only reports a headline, not a core, inflation rate. Thus, investors may focus primarily on Eurozone’s core CPI in order to gauge the timing of the ECB’s next policy action. 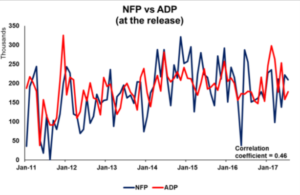 In the US, the ADP employment report for August is due out. The forecast is for the private sector to have added 178k jobs, the same number as in July. Such a solid print could heighten speculation that the NFP print due out on Friday will also meet its forecast of 185k. However, we have to sound a note of caution. Even though the ADP print is the only major gauge of the NFP, the correlation between the two figures has fallen markedly in recent months. 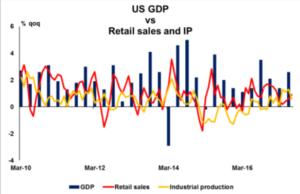 Staying in the US, we also get the 2nd estimate of GDP for Q2 and expectations are for a slight upward revision from the preliminary estimate. Indeed, the only major indicators released after the 1st estimate of GDP were personal spending and factory orders for June. Even though they came out more or less in line with estimates, they showed decent upward revisions in May’s prints, supporting the case for a marginal upward revision in GDP. Something like that would be an encouraging development for FOMC policymakers, but we think that inflation data may play the biggest role in determining the timing of the next rate increase. 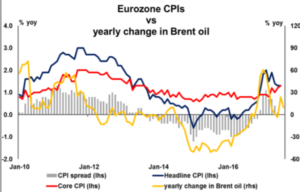 On Thursday, Eurozone’s preliminary CPIs for August will take center stage. The forecasts are mixed, with the headline rate expected to tick up and the core rate anticipated to tick down. We share the view for an uptick in the headline rate, but we see the risks surrounding the core forecast as tilted to the upside, perhaps for an unchanged rate, or even a fractional increase. The headline forecast is supported by the bloc’s preliminary composite PMI for the month, which showed that output prices rose at the fastest pace in three months. As for the core rate, the yearly change in oil prices remains close zero, which makes us believe if the headline inflation rate indeed increases, the core rate may move in a similar fashion. We believe that this could well be another set of data supporting the case for the Bank to announce some changes to its QE program soon. Absent any significant deterioration in upcoming indicators, we think that a realistic scenario is one where the Bank removes it QE easing bias in September, thereby paving the way for a formal announcement in October that the pace of QE purchases may be reduced by the turn of the year. 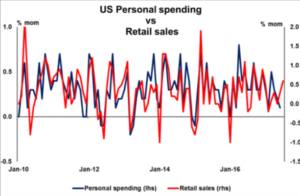 From the US, we get personal income & spending, as well as the core PCE price index, all for July. Kicking off with income and spending, both of these rates are expected to have risen from the previous month. The income forecast is supported by the uptick in the nation’s average hourly earnings rate for the same month, while the spending forecast is supported by the acceleration in July’s retail sales. 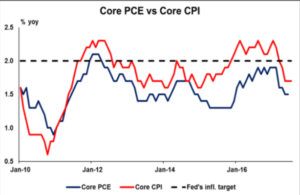 Turning to the core PCE index, in the absence of a forecast, we see the case for the rate to have remained unchanged, with risks tilted to the downside. We base our view on the core CPI rate for the month, which held steady at +1.7% yoy. However, the fact that the services PMI showed that average prices charged by firms increased at a weaker pace than the previous period suggests that if there is a movement in the core PCE rate, it may be to the downside. 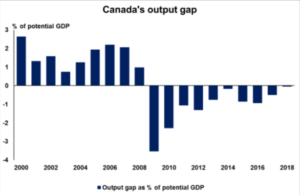 In Canada, GDP data for Q2 will attract attention, though no forecast is available yet. Our own view is that the nation’s economy may have grown at the same pace as previously, with downside risks. Even though April’s and May’s average monthly GDP is roughly equal to the average of the Q1 monthly prints, the soft retail sales for June suggests that the economy may have lost some momentum towards the end of Q2. In any case, a slight a slowdown would still be in line with the BoC’s latest forecasts and thus, we doubt that such a print will have much effect on the elevated market expectations regarding another BoC rate hike this year. Indeed, the economy’s output gap continues to narrow at a steady pace and is expected to close entirely by the turn of the year, which implies that inflationary pressures are likely to pick up afterward. 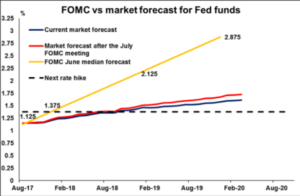 Finally, on Friday, the US employment report for August will take center stage. The consensus is for non-farm payrolls to have risen 185k, slightly lower than the 209k in July, but still, a strong number that is consistent with even further tightening in the labor market. The unemployment rate is expected to have remained very low at 4.3%, while average hourly earnings are forecast to have risen at the same pace as in the previous month, something that would drag the yearly rate slightly higher. Such a strong report could raise somewhat the probability for another Fed rate hike this year, which declined recently after the July FOMC minutes showed more officials were concerned with low inflation.

Having said that though, we believe that the primary determinants of whether the Fed will indeed proceed with another rate increase this year are inflation data. The latest prints showed that even though the headline CPI rate rebounded marginally after dropping for 4 months, the core rate remained unchanged, which cast more doubts on whether the softness in inflation can indeed be attributed to idiosyncratic factors. In our view, a strong rebound in inflation is needed before rate-hike expectations rise materially and help the dollar reverse its latest downtrend. 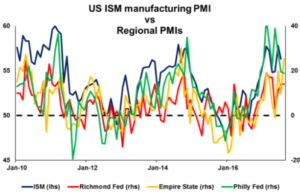 We also get the nation’s ISM manufacturing PMI for August and the forecast is for the index to tick down, but to remain at a healthy level, consistent with strong growth in the sector. We view the risks surrounding the forecast as balanced, given that the regional manufacturing indices did not paint a clear picture of the sector’s health during the month. Even though the Empire State print rose notably, the Philly Fed index edged lower, while the Richmond Fed one remained unchanged. In any event, we think that the ISM print may attract less attention than usual, as investors may still be digesting the all important employment data that will be released a few minutes earlier. 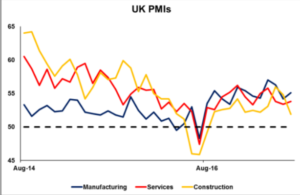 In the UK, the manufacturing PMI for August is due out. Expectations are for the index to decline marginally, but to remain at a healthy level. In any case, we don’t expect such a print to affect the BoE’s policy plans. Back in June, Governor Carney made it clear that any near-term rate hike would likely depend on a pickup in wages and business investment. Given that wage growth has shown little-to-no signs of firming, and that the latest investment prints for Q2 were stagnant in both quarterly and yearly terms, we doubt that any rate hike is looming. In fact, we believe that the hawkish BoE members may even withdraw their rate-hike votes at the upcoming meetings, in light of the aforementioned soft data.

Disclaimer:
This information is not considered as investment advice or investment recommendation but instead a marketing communication. This material has not been prepared in accordance with legal requirements designed to promote the independence of investment research, and that it is not subject to any prohibition on dealing ahead of the dissemination of investment research. Past performance does not guarantee or predict any future performance. Redistribution of this material is strictly prohibited.
[/lockercat]