Today the ECB decided to keep their policies unchanged, this set a dovish tone before the ECB President Mario Draghi made his statement. Investors were listening to clues to when the Europen Central Bank will start tapering (unwinding their money printing policy).

Investors may have been disappointed as there was no clear date for tapering. Mario Draghi stating “Council unanimous in not setting a date for Quantitative Easing change.” He was also asked a whether a particular data point the ECB will be monitoring which could trigger a change in the ECB’s QE policy. Mario Draghi replied, “no one data point will trigger QE decision”, he also stated that QE will run until the ECB sees sustained pickup, as core inflation has yet to show a convincing upward trend. 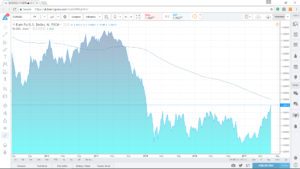 So given that the tone of the ECB and Mario Draghi was dovish why has the EUR/USD broken 2017 highs and is now trading above the 1.16 handle? There could be many reasons for this; one reason could be that Draghi was bullish on Europe’s economy. Another possible reason is that when Mario Draghi was questioned about the recent strength of the Euro, he didn’t push back or try to talk the Euro down. The overall message by Draghi was dovish and the takeaway point is the ECB will be “persistent and patient”, and they trust the strength and power of their policy package.

The rally in the EUR/USD is also down to Dollar weakness. It was announced today by Robert Mueller the head of the special counsel that has been charged with investigating the links between the Trump campaign and any possible Russian influence in the 2016 US Presidential elections, announced that he will be expanding his investigation into US Presidential Donald Trump’s business transactions. Some of the transactions that Mueller will be looking into are the sale of a Florida Mansion from Trump to a Russian Oligarch in 2008, and the Miss Universe Pageant in Moscow 2013 organised by Trump. Some of Trump’s team will also be under investigation, these include Jared Kushner and Paul Manafort.

This new line of investigation will be troubling to US President Trump as he already warned Mueller that his personal dealings and businesses are off limits. I’m sure over the coming weeks and months we will be hearing more information about this investigation.